A $425MM credit union was able to generate nearly $1M in deposits simply by tying a CD promotion to a local rodeo event.

We’ve been talking a lot recently about deepening relationships through engagement, and this simple one email campaign was able to generate a 2.3% conversion rate and drive branch traffic by celebrating their branch anniversary alongside a local rodeo.

The credit union targeted all 601 of its members at a single branch to celebrate the anniversary week of that branch, drive branch traffic, and promote their CD specials. Utilizing email, the most cost-effective form of communication, allowed the credit union to spend only $6.01 on the entire campaign which resulted in $907,966 in new deposits – from one single branch.

This one email accomplished 3 different goals for this credit union:

The credit union opted to celebrate their anniversary alongside a local week-long rodeo event. The email they sent invited each of their 601 members to come into the branch and enter for a chance to win a $100 gift card to a local steakhouse and 4 tickets to the rodeo event. To further incentivize, they asked their membership to stop in each day to join them for a special treat.

It served to deepen relationships and was a component of their member satisfaction promotion.

Finding meaningful reasons to communicate with your members is one of the best ways to build loyal, lasting relationships. By offering these giveaway items and opportunities to come in and join the branch employees for complimentary treats, the credit union was able to demonstrate the value of their members, and participate in a popular local event.

It promoted the current CD specials – and they converted.

They offered three different CD specials, with a minimum opening deposit of $500:

At a penny per email, the entire promotion only cost the credit union $6.01 and $0.43 per conversion.

It’s important to note that not only did this campaign generate serious deposit growth for the credit union, it also played a big part in their member satisfaction program and gave them a reason to engage and deepen relationships with their members. 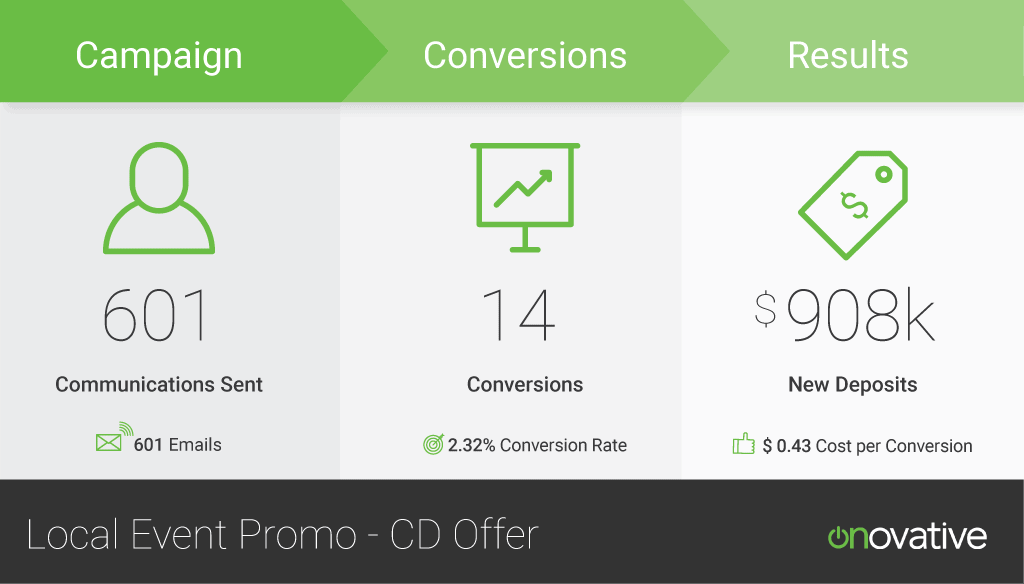