How One Credit Union Generated $8.4 Million in Mortgages with a 4-Touch Campaign 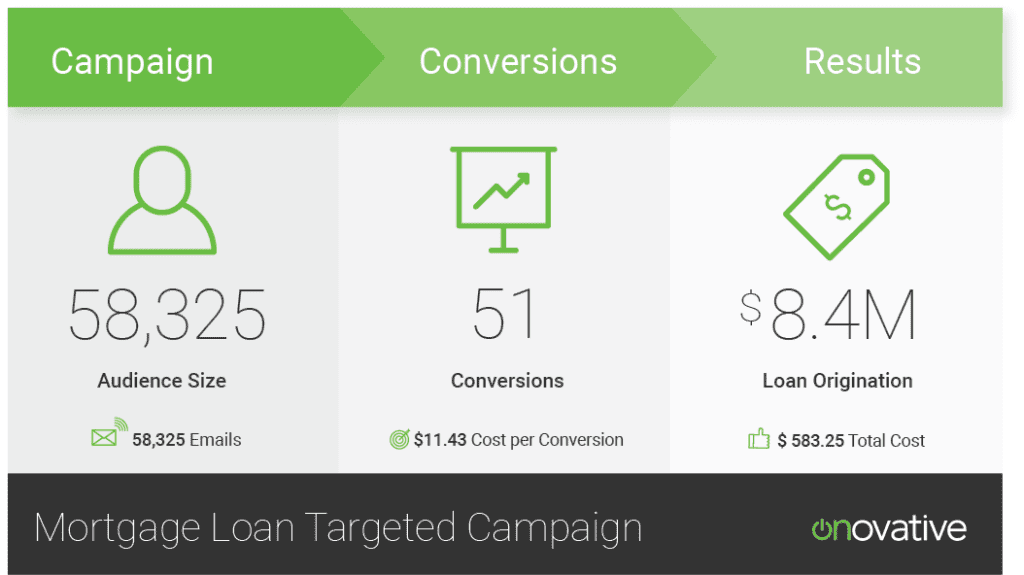 Campaign success resulted from sending 58,325 emails to an audience segment of nearly 15,000 members.

The credit union targeted nearly 15,000 members to promote their zero PMI, zero closing costs mortgage loan offer. These members were selected based on the following criteria:

They were able to segment this audience and queue up their promotional campaign within minutes, all using one system – Core iQ. They sent 4 emails, totaling 58,325 emails and $583.25 at a penny-per-email.

With 20% down, members received zero closing costs, below market rate, cash out available, and up to 30-year terms.

Their offer, combined with sending 58,325 emails in Core iQ, resulted in 51 new mortgage loans for the credit union.

The credit union’s 4-touch mortgage loan offer campaign resulted in a .09% conversion rate. According to industry standards, that may seem low.

However, the credit union knew how to think beyond a conversion rate and instead focused on the average value of a single mortgage loan and mortgage customer. Thinking this way, they determined it would be more lucrative for them to invest more in acquiring new loans, which is why they sent nearly 60,000 emails to their membership.

In doing so, they reached a loan growth goal by generating $8.4 million dollars in new mortgages, while only spending $583.25 in total campaign costs – not including any fee or interest income they received.

They were able to successfully acquire 51 new mortgage loans and in the end, only spent $11.43 per conversion.

Most community banks and credit unions struggle to see how much actual revenue, loan, or deposit growth a single campaign generates. Since that data can be hard to track and calculate for most financial institutions, banks and credit unions are turning towards solutions like Core iQ to help them understand these specific conversion rates. Because Core iQ is connected directly to your core banking system, it automatically tracks if a member or customer adopts a product or service after receiving a specific offer – putting all of your conversion tracking data together for you. For more information on how Core iQ is helping banks and credit unions reach their unique loan or deposit growth goals, sign up for a quick demo of Core iQ.