A 628MM college credit union generated $11.5M in new loans by creating a targeted fall auto loan campaign that was sent out to 23,473 of their membership.

The college credit union utilized Core iQ to define the target audience they wanted to reach. They segmented half of their membership without an existing auto loan, and ended with an audience size of 23,473.

A good place to start when sending any kind of loan offer is to segment your audience down to those customers in good standing. That includes individuals who have never defaulted, charged off, or missed a payment.

They sent multiple communications to the same audience over a short period of time – 3 emails to those relationships they had email addresses for, and used Core iQ’s print alternative feature to send 2 postcards to those without an email address.

They didn’t have to do any additional work to separate out their list for email vs. print. Core iQ automatically identified people with email addresses and those without so the most cost effective communication could be sent out automatically.

A total of 58,323 emails and 10,112 postcards were sent to their segmented membership, and the campaign generated 491 new auto loans.

The college credit union offered up to $500 cashback and 60 days with no payments for any member who purchased a 2008 or newer vehicle with less than 80,000 miles. There was a small loan processing fee of $189 dollars and members had an opportunity to earn 1% cashback, up to $500.

There wasn’t any mention of interest rates or any additional information in their marketing messaging. They sent out this offer in a series of three emails and two postcards to their defined audience.

Fall ended up being a perfect time of year for the credit union to promote their auto loan campaign as they were able to generate 491 new auto loans at a 2% conversion rate.

This simple five-touchpoint campaign helped this college credit union grow loans by $11.5M and showed the success marketing campaigns can have from pairing print and email communications. 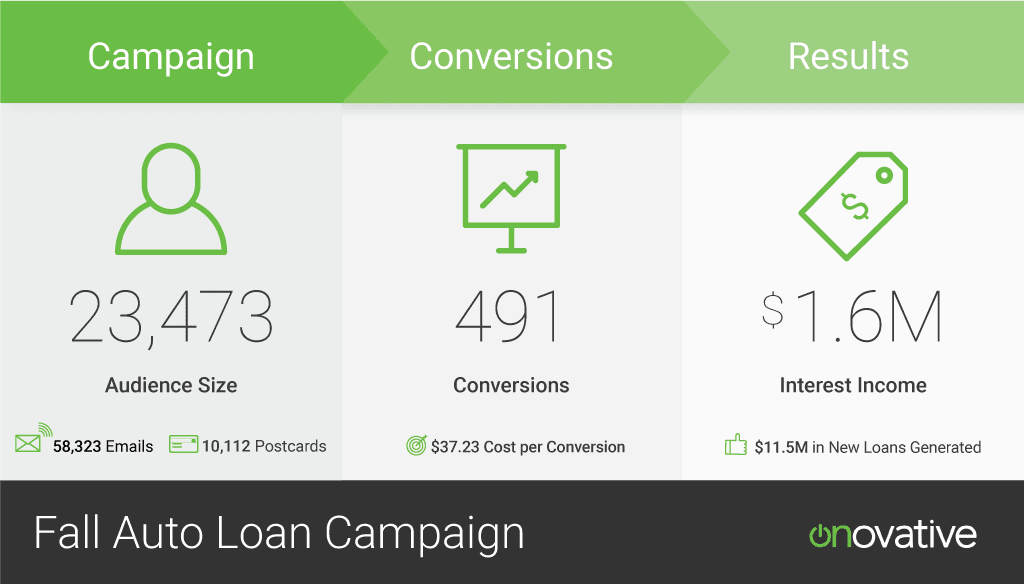