46% of Consumers May Not Use Debit Card Post Target Breach

In our most recent survey of bank and credit union customers, we wanted to gauge the current comfort level of debit card use, in light of the recent large-scale breach of consumer information at Target locations across the country. The survey was conducted approximately 10 days after Target confirmed the breach of point-of-sale data. The results show that although a majority (54%) said the breach had not caused increased hesitancy in debit card use, a large number of respondents said that it had (46%). 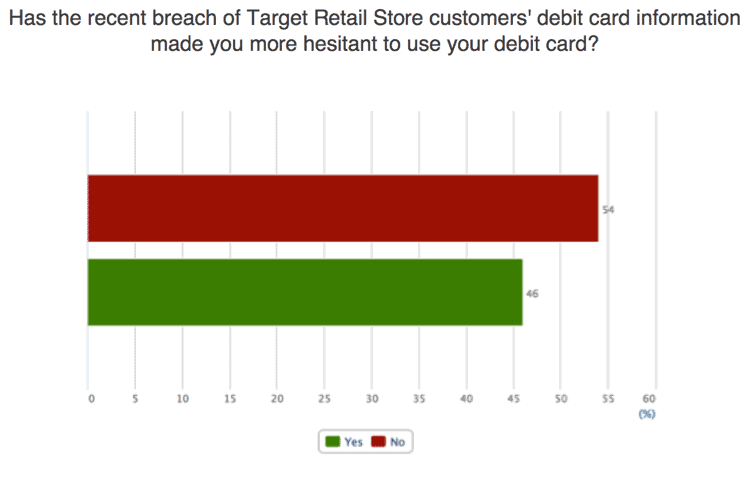 When we reviewed the respondent data for any additional insight, we found the response breakdown was uniform across all demographics. A recent article from the Credit Union National Association (CUNA.org) spoke to a growing debate among industry and security experts over what implications this breach might have on payment systems. According to CUNA, that debate centers around two questions: 1. Will debit cards suffer a drop in consumer confidence as a result of the breach? 2. Would the more secure EMV-chip (SmartCard) technology have prevented this loss of consumer data? With 46% of respondents saying they are now less likely to use their debit card for point-of-sale transactions, our survey results appear to answer the first question. With regards to the second question, there appears to be less agreement among industry experts. Although EMV card technology is the norm in most other countries, it has not yet gained acceptance in the United States. The reasons for this are varied, ranging from higher cost, perceived lower consumer demand, and merchant’s inability to accept the new technology. However, there has been an increased push by major credit card companies to encourage EMV adoption by financial institutions and merchants as of late. If consumer demand is considered a stumbling block to adoption of this new technology, survey results like those above could indicate a rise in post-breach consumer attitude in favor of wider EMV adoption. With breaches like the one that happened this past holiday season and an increased loss in market share to credit cards, some may forecast an end to the debit card’s prevalence. Whether we have seen the last of the debit card or merely how it exists today remains to be seen. Nonetheless, this survey certainly demonstrates that, for the moment at least, consumer confidence in this form of payment has taken a significant hit.