In our most recent survey of bank and credit union customers, we were interested in learning how many still routinely carry a personal checkbook. With increased use of credit cards, debit cards, and electronic bill-pay, many have proclaimed the death of the written check. Although our survey results certainly reflect a growing shift towards paperless banking services, they also reveal that a significant number of respondents still choose to carry a checkbook on a daily basis. 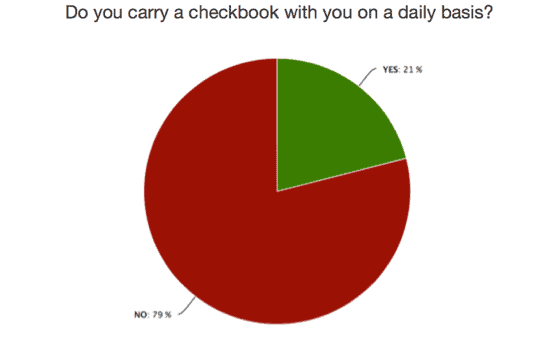 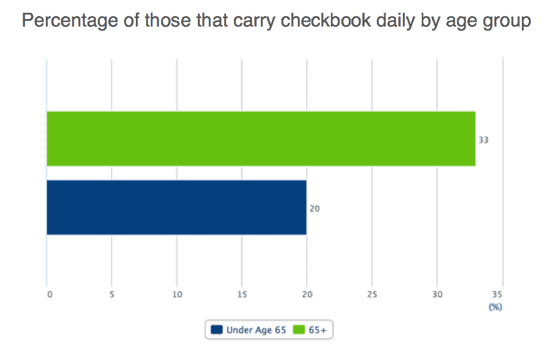 This is not particularly surprising, as individuals in this age range have spent a lifetime growing accustomed to paper transactions. This was evidenced back in 2011 when Social Security Administration payments went paperless, sparking a large outcry from many senior citizens.

Our survey explored the act of carrying a checkbook, rather than actual use. Nevertheless, the results do support an overall trend away from personal check usage. How much of this shift is a result of increased ease of newer payment methods or concerns over security, is outside the scope of this survey, but may warrant further exploration down the road.

With that said however, at 21%, our results show a sizable number of consumers still see enough value in this method of payment to warrant daily carry, a number that should not be ignored. The good news for these customers is that while concerns over fraud and speed of service have prompted some merchants to refuse personal checks as a point-of-sale payment, roughly 89% of small businesses still accept them. Now, that decision is likely made more on the basis of cost savings as opposed to accommodating customers still writing personal checks, but clearly merchants recognize a continued role for this form of payment. In addition, new technologies such as remote deposit capture would likely not have been developed and adopted if the end of paper checking was considered imminent. So although the personal check may no longer be a preferred method of payment, to paraphrase the great Mark Twain, it seems “the reports of its death have been greatly exaggerated”.